Entrepreneurs and investors who have spent any time dealing with convertible debt seed financing transactions are likely to have encountered the subject of valuation caps.  In brief, a cap acts to place a limit on the conversion price of a convertible note such that investors are guaranteed a minimum number of shares for their bridge loans if the startup does a priced equity financing round at a high pre-money valuation – “high” meaning above the cap, which is often a heavily negotiated term.  (The cap is irrelevant if the next equity financing is at a valuation below the cap amount.)  Rather than reinvent the wheel, I would point readers to Martin Kleppmann’s useful  blog post with graphs illustrating the effects of a valuation cap on entrepreneurs, seed investors and later-round (typically VC) investors.

Valuation caps can come into play in settings other than seed-stage convertible note financing rounds.  Depending on the circumstances, they can shape the fundamentals of an exit, redistribute value among stakeholders, or even kill a deal altogether. Never missing an opportunity for a good war story, I’d like to revisit one high-profile transaction, the $650 million acquisition of MySpace by Fox Interactive Media, on which I spent many sleepless nights along with the rest of the deal team in July 2005. 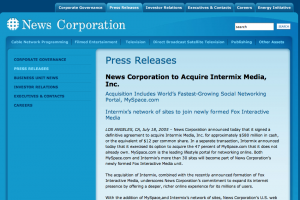 This discussion expands on my Quora answer to a specific question: “Why were the stock options of MySpace employees worthless even though the company was sold to News Corporation for hundreds of millions?”  The complete story includes a startup-within-a-startup, investments and exits by two VC firms, and some genuine corporate drama.

The TL;DR answer to the stock option question is that MySpace options were cashed out at modest value at the time of the FIM merger, coming on the heels of the spin-out of MySpace into a separate subsidiary by parent company Intermix Media, with an infusion of new capital from Redpoint Ventures.  There were two distinct classes of employee equity (issued by Intermix and MySpace, respectively) with different valuation and vesting situations—and, most significantly, a $125 million valuation cap applied to the buyout of MySpace equity that was triggered by the acquisition of Intermix.  Read on for a fuller explanation.

Because Intermix was a public company at the time, the related SEC filings and their exhibits, including the 81-page proxy statement and 42-page merger agreement, make for good bedtime reading.  For more page-turning corporate drama, including the feud between Intermix co-founders and UCLA college buddies Brett Brewer and Brad Greenspan, Nasdaq delisting, proxy contest and lawsuits by Greenspan after he was fired as CEO, see Stealing MySpace by WSJ reporter Julia Angwin.

Sucker Insurance
Intermix and its advisors knew MySpace was a hot property, so the spin-out was structured with an option to buy back the remaining 47% of MySpace at a predetermined valuation of $125 million if an acquisition offer was received within a year.
The early history of MySpace is inextricably intertwined with that of Intermix, a small-cap publicly traded Internet company (AMEX: MIX) in Los Angeles where I worked as corporate legal counsel from 2004-06.  MySpace was incubated by a small team of employees within Intermix in 2003 (Chris DeWolfe, Tom Anderson, Josh Berman, Aber Whitcomb, Colin Digiaro and Kyle Brinkman).  Intermix had acquired their previous online marketing startup, ResponseBase, and they remained a cohesive group.  Intermix wasn’t an incubator per se, but it created, acquired and operated a portfolio of consumer Web properties in the areas of content, community and e-commerce, of which MySpace turned out to be the biggest hit by orders of magnitude, becoming the fastest growing site in the history of the Internet and the defining brand of the social media explosion between 2004 and 2008.

Intermix was in a turnaround situation when I arrived in mid-2004, having been delisted from Nasdaq and nearly bankrupt.  VantagePoint Venture Partners came to the rescue in late 2003 with an infusion of $15 million in capital, adding Andrew Sheehan (now at Sutter Hill Ventures) and David Carlick (now at Rho Ventures) to the Board. Part of the deal was bringing in a new CEO, Richard Rosenblatt. The company was relisted on AMEX, financial performance and traffic metrics improved,

and its stock price climbed from about $2/share in July 2004 to $12/share cash offered a year later by FIM, a newly created unit of News Corporation. Although Intermix was doing well during that period, bringing in around $75 million annual revenue, all of the explosive traffic growth was occurring at one property, MySpace – the jewel for which FIM ended up acquiring the whole Intermix crown.

By the fall of 2004, the site’s explosive growth attracted the attention of many potential investors and buyers.  Redpoint, led by Geoff Yang, invested $11.5 million for a 25% stake in MySpace (spun out from Intermix as a majority-controlled subsidiary), with Geoff and Chris Moore joining its board of directors. The spin-out took a few months to negotiate and didn’t actually close until February 2005.  MySpace became its own company, MySpace, Inc., with Intermix owning 53%, MySpace Ventures (an entity owned by the six founders) holding 19.9%, Redpoint taking 25%, and the remainder going to employee stock options. (At that time, the MySpace team had grown to some 30 or 40 employees, housed in separate office space in Santa Monica.) These options were granted shortly after MySpace, Inc. was spun out, and the valuation was set by that financing round. The MySpace founders took some money off the table in the Redpoint deal, albeit at a $35 million pre-money valuation.

Intermix and its advisors weren’t fools. They knew MySpace was a hot property and that acquisition offers were likely, so the spin-out was structured with an option that gave Intermix the right to buy back the remaining 47% of MySpace, Inc. at a predetermined valuation of $125 million if a bona fide offer to acquire Intermix was received within a year (i.e., by February 2006). From the parent company perspective, it would have been reckless to do a spin-out without such a provision because most potential acquirers would insist on owning 100% of MySpace. That buyout option was limited by another clause stating that that if MySpace itselfreceived a direct bona fide acquisition offer valuing it at more than $125 million, the Intermix buyout option would terminate. (This set off a race of sorts once it became clear the company was in play.)

Early bird Murdoch
Others took too long to execute, but News Corp. pounced on the company, acquiring us for $12/share in cash — a total purchase price of $649 million.
Within weeks after the Redpoint deal closed, in the spring of 2005, Intermix was signing NDAs and taking meeting requests from people who wanted to acquire MySpace. This part of the story is told in both Stealing MySpace and in the “Background of the Merger” section of the merger proxy.  In summary, others took too long to execute or weren’t serious enough shoppers, but Rupert Murdoch and News Corporation pounced on the deal, acquiring Intermix for $12/share in cash ($580 million). News also funded the $69 million Intermix needed to buy out the 47% minority interest immediately so that it owned 100% of MySpace, Inc. Therefore, the true purchase price was $649 million rather than the widely reported $580 million figure.

At the end of the day, this liquidity event paid off as follows:

To sum up, as a result of the capped buyout option at the Intermix level, Intermix shareholders (including executives and long-time employees with vested options) exited at a $580 million valuation that captured most of the value created by the success of MySpace, and the MySpace founders, investors and employees were limited by the capped upside. 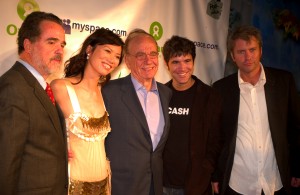 For a detailed analysis of the investments by VantagePoint and Redpoint and their respective returns, see Bill Burnham’s excellent blog post.

Reasonable minds can differ on the relative fairness of the outcome for all involved, but the major lesson in my opinion is that the way the buyout option was structured — within the context at the time — transformed the economics in ways that might have been foreseeable but certainly were not guaranteed.  To be sure, exiting at a 4X valuation in less than a year is not a bad investment, but it’s also not the type of exit that angels, VCs and founders usually have in mind.  Redpoint was understandably disappointed that it didn’t get the chance to see its MySpace investment through to an IPO or later liquidity event at a higher multiple.

This article first appeared at the Gust Blog. Reprinted with permission.