Occasionally a question comes along on Quora that resonates with me on a personal level, calling for a more in-depth answer that draws on my own experiences as a Silicon Valley native and tech industry lawyer. One such question, “What was it like in Silicon Valley after the bubble burst in the early 2000s?” led me to write one of those answers. I was humbled to see Robin Wauters repost an excerpt in TechCrunch (complete with my mug shot) and link to my Quora answer on the subject. I’ve reposted the piece in its entirety here for those who don’t care to go down the Quora rabbit hole.

What was it like in Silicon Valley after the bubble burst in the early 2000s?

Sudden, shocking, and depressing. I think most of us saw it coming, but the speed and severity of the crash came as a hell of a shock. Settle down, youngsters, for a long answer from a Valley native who labored in the trenches at two firms at the heart of the boom-and-bust cycle (parental discretion advised).

By 2000, it seemed like everyone I knew in their 20s and 30s was working for a dot-com. (That should have been a warning sign right there.) Not just Bay Area locals; new college grads and experienced business and technology professionals were migrating here from all over the country in the years leading up to the crash. Commentators famously compared it to Florence during the Renaissance. The housing market was beyond ridiculous at the peak. I mean worse than the usual “Bay Area ridiculous” that’s been the status quo since the 1980s. (People were resorting to paying six months or a year’s rent in cash in advance in order to get a decent apartment in SF.) Having moved back to Palo Alto in 1998, I barely recognized my home town; every billboard up and down 101 advertised some kind of Internet business with a silly name. I worked for a high-profile Internet company (Excite@Home) whose gleaming new headquarters served as a billboard of sorts, right up against 101 in Redwood City with our logo visible to thousands of cars whizzing by — or rather inching by; traffic during that period was as bad in the Bay Area as it was in LA, with even 280 turning into a pretty bad traffic jam most mornings as people commuted south from the City to thousands of newly created jobs at newly created companies up and down the peninsula.

Leading up to the crash, I worked in a job that was tightly tied to the state of the “dot-conomy.” As a lawyer in one of the corporate groups at Wilson Sonsini Goodrich & Rosati in Palo Alto, the Valley’s largest law firm, from 1998-2000, I contributed in my own little way (there were hundreds of us) to the IPO, M&A and VC factory that was WSGR at that time. It was the best career decision I ever made because of the doors it opened, but it also became sheer misery by late 1999 when everybody and their dog was trying to go public at once. When I left to go in-house to Excite@Home (April 2000, coincidentally the date of the first Nasdaq “correction”), my group alone (two partners, several associates and paralegals) was working on nine IPOs simultaneously, on top of all the usual venture financings, M&A and general corporate work. 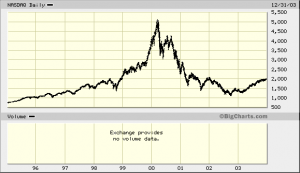 Corporate finance is one of the most cyclical areas of work there is. When public markets are going strong, everyone is in a rush to close public offerings while the window is open. When the window is shut, nobody can do much but sit and wait (except the occasional “fire sale” of distressed companies and assets). Of the nine IPOs we were working on in April, I think two of them (both biotechs) made it out later that year. The remaining companies never went public. I think they either went under or were eventually acquired by bigger companies. The IPO market has never been anywhere near that active in the decade since.

I was relieved to have joined a relatively large, mature, “stable” Internet company in 2000. Excite had been around since the dawn of the commercial Internet in 1993, as a rival to Yahoo!, Lycos, and AltaVista. We had 3,000 employees and were doing $600 million revenue at the peak. I was hired to support the corporate development team in doing acquisitions, strategic investments, joint ventures and other fun deal stuff, as well as public company governance and securities work.

In the third quarter of 2000, online advertising shrank overall for the first time, dropping 6.5 percent, to just under $2 billion dollars. The average price of a banner ad toppled from a $50 CPM to less than $5.

This explains in large part why Yahoo!’s stock price cratered from nearly $100 when I interviewed there (early 2000) to under $10 a year later.

The dominos fell pretty quickly. Progressively larger dot-coms went under, each one casting a bigger shadow on markets for labor, commercial real estate, equipment, advertising, and all kinds of professional services. Equipment makers, infrastructure providers and landlords soon started getting hammered as failed startups liquidated everything, dumping tons of barely-used equipment on the market (famously Herman Miller Aeron chairs, as well as the expected PCs, servers and network equipment).

Large corporations started downsizing as well, reacting to poor macro conditions, meaning they dumped millions of square feet of vacant office space on the market for sublease just as demand evaporated. I and everyone I knew started reading Philip Kaplan‘s FuckedCompany.com on a daily basis. People held “pink slip parties” to make the most of the situation, and begin networking in search of the next job, but it soon became apparent to many that there were far too few jobs to be had. Stories appeared in the newspaper of net outmigration from the Bay Area for the first time in living memory; there was a U-Haul shortage (no joke) as people rented them for one-way moves back to Vegas or Dallas or wherever the economy was healthier to get a regular job. Enterprising promoters held raves in the abandoned former headquarters of failed dot-coms. Bankers, lawyers and accountants who’d struggled to hire fast enough during the boom found themselves with a large number of highly paid workers with nothing to do. From Ariba to Yahoo!, everyone’s stocks got clobbered. The Nasdaq chart above is worth a thousand words.

In a lovely coincidence of timing, services like E*TRADE had brought discount stock trading to the masses, and retail investors bought into risky dot-com stocks at highly inflated valuations, only to see many of them lose 90-99% of their value within a couple years (100% for the bankruptcies).

Stories appeared in the newspaper of net outmigration from the Bay Area for the first time in living memory.
Unemployment plus heavy capital losses plus high cost of living equalled financial disaster for many people. I knew many couples where both partners were laid off from dot-coms within months of each other. (One highlight was representing a friend at an EDD hearing where she had to fight for her unemployment benefits.) On top of everything else, the terrorists attacked in September 2001, and the broader financial markets panicked. It had mostly been a tech meltdown up until that point, but pretty much everyone’s stock was killed in late 2001-02.

Back to Excite@Home, we were busy selling off assets throughout 2001, hoping to pay down debt and refocus on the core @Home residential broadband ISP service. The conflicts of interest and lawsuits are fodder for another post, but suffice it to say that it was too late to turn the Titanic. We filed for bankruptcy within weeks after 9/11, making for a thoroughly depressing fall and winter. The company shut its doors in March 2002; as part of the legal team handling the bankruptcy, I was one of the
last 50 or so employees left standing, less than two years after joining a company of 3,000.

One of the most poignant scenes was the network operations center (NOC) at 550 Broadway — once the pride of the company as nerve center of a pioneering nationwide fiber-optic backbone, a “parallel Internet” with distribution and caching architecture to push large files as close to customers as possible. (This was developed before content distribution networks (CDNs) like Akamai became significant players.) 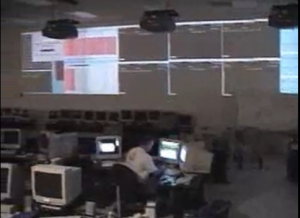 Once a beehive of activity that resembled NASA Mission Control, the NOC was shut down along with the network after we’d transitioned the last of the cable providers off our broadband network. There was a countdown to the shutdown, and then everything was switched off. It felt like pulling the plug on a brain-dead patient in the hospital ICU. After the last ops and engineering staff were laid off, I remember wandering through the cavernous, deserted NOC, strewn with assorted equipment that was left to be carted off to auction, looking up at the huge projection screens that forlornly flickered “No Signal.” It felt downright post-apocalyptic, with huge diesel generators out back standing ready to provide backup power to a NOC and data center that no longer needed it.

But I digress. Bottom line, within a year after our wedding, both my wife and I were laid off from failed Internet companies. Grateful not to be saddled with a mortgage, we gave notice, put our stuff in storage and left town, like thousands of others, uncertain at the time whether it would be temporary or permanent. Although this predated the term “FUNemployment,” we spent a month on a cross-country road trip, trying to decompress while I applied for jobs like crazy and called every recruiter I knew. There were absolutely no jobs in the Bay Area for a corporate deal lawyer like myself, so I cast a wider net.

I remember wandering through the cavernous, deserted NOC, strewn with assorted equipment that was left to be carted off to auction, looking up at the huge projection screens that forlornly flickered “No Signal.
“Eventually I landed a good in-house job at a large tech/media company, Gemstar-TV Guide, which was a relief. (What happened to GMST, and my next company after that, MySpace, is fodder for more good boom-and-bust war stories.) The only hitch was that it was based in Pasadena, so we had to relocate to Southern California. So I guess we did our part to ease the traffic and housing conditions in the Bay Area. (You’re welcome.) 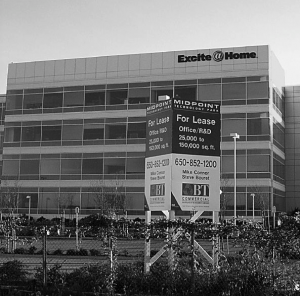 to turn this into an autobiography, but I think my own experiences (and those of my friends and family) were representative of conditions at the time. (My folks have lived in Palo Alto and Menlo Park since 1975, and added some perspective.) The Excite@Home headquarters sat empty for five years before Stanford finally bought it in 2007 and turned it into an extension of its outpatient medical clinic. Overall, the recovery was S-L-O-W in coming; it wasn’t until around 2003-04 that things started seeming good again. Let’s hope they never return to the overheated state of 1999; what goes up must come down.