In late September, a post by Mike Arrington on TechCrunch ignited a firestorm that roiled the close-knit Silicon Valley tech startup community, garnering attention as far away as Europe.  Promptly christened “Angelgate,” the scandal involved allegations that a group of influential, well-connected “Super Angels” met at Bin 38, a wine bar in San Francisco’s Marina district, on the evening of September 21, 2010, with allegedly collusive objectives to depress the valuations of early stage startups, exclude traditional VCs from deals, and counter the rising power and influence of Y Combinator, among other things.  According to Arrington:

This group of investors, which together account for nearly 100% of early stage startup deals in Silicon Valley, have been meeting regularly to compare notes. Early on it was mostly to complain about a variety of things. But the conversation has evolved to the point where these super angels are actually colluding (and I don’t use that word lightly) to solve a number of problems, say multiple sources who are part of the group and were at the dinner. According to these sources, the ongoing agenda includes:

I won’t rehash the whole Angelgate saga here; these posts and emails by Michael Arrington, Dave McClure, Ron Conway and Chris Sacca give the best overview for those who aren’t familiar with the story.  What caught my attention was that Arrington’s piece included some serious allegations of white-collar crime — what he called “collusion and price fixing” — that could reasonably be expected to prompt investigations by the FBI or other law enforcement agencies. Beyond the obvious, my particular interest in this story relates to the role of anonymity (and its close cousin,  pseudonymity) in social media, its facilitation of information flow in a way never seen before, and the fragility — under some circumstances — of that anonymity.

Bear with me as we cut to Quora, a next-generation question-and-answer site that has been a darling of Silicon Valley in recent months, due in part to its impeccable pedigree:  Headquartered in downtown Palo Alto, founded by Facebookers Charlie Cheever and Adam D’Angelo, and endowed with $11 million in Series A funding from top-tier firm Benchmark Capital, Quora describes itself as follows:

Quora is a continually improving collection of questions and answers created, edited, and organized by everyone who uses it. The most important thing is to have each question page become the best possible resource for someone who wants to know about the question.

In reality, Quora has quickly become a vital online community, seeded with content contributed by many influential figures from the startup community during private beta in early 2010.  The site’s high signal-to-noise ratio and well-enforced standards of user conduct thus far make it a useful resource, avoiding the descent into flame wars, self-promotion, spamming and other unpleasantries that so often degrade the user experience in online forums.  (I myself am a regular contributor to Quora on questions related to startups, seed financing, Internet law and the social Web, as well as personal interests.)

For those investigating or writing about events and people in the tech startup community,

Quora has become an attractive source, in part because its well-connected members can choose to contribute anonymously.  Not surprisingly, this anonymity encourages frank and often unflattering discussions and observations about colleagues, CEOs, investors, celebrities, and other people in positions of power without fear of reprisal.  (As one example, see “Which Big-Name VC Firm Screwed Steve Blank?”)  The honesty displayed on the site can be refreshing, although it falls short of journalistic standards because anonymous sources are not verified.

The timing of Angelgate, coming on the heels of Quora’s public launch, made it a natural forum for related discussions. Within hours after the initial TechCrunch post, questions began appearing on Quora such as “Who are the Super Angels that Michael Arrington is talking about in his 9/21/10 TechCrunch post? What merit is there in his accusations?”  Within 24 hours, some, such as Bryce Roberts, had publicly acknowledged their presence at the Bin 38 meeting on Quora.  Many others added answers or comments on an anonymous basis; for example, see the “Anon User” responses to this question. 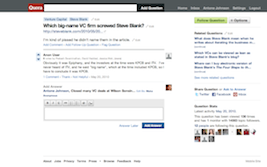 The discussion of potential criminal charges, bolstered by this report of a possible FBI investigation, got me thinking about the fragile nature of online anonymity.  When a criminal investigation or civil litigation gets underway, the parties can invoke the court’s power to compel disclosure of evidence in the possession of third parties by issuing a subpoena, search warrant or similar document (known generally as “legal process”).  Online service providers such as ISPs, hosting and email service providers are all too familiar with these requests, often having to respond to hundreds of them each month.  There is a long-established body of case law involving private parties (usually companies) that have sought to compel disclosure of IP address, email address or similar information in order to pursue a claim against an anonymous poster in an online forum for defamation, theft of trade secrets, securities fraud, or other causes of action, or to fight piracy of copyrighted works.

Without going down the dark alley of the Electronic Communications Privacy Act (ECPA), a federal privacy law governing the conditions under which an electronic communication service provider can share them with third parties, as a general rule, basic user information can be obtained with a valid subpoena or court order.  (Contents of private communications, such as email or private internal messaging systems, generally require a search warrant, which is harder to get.)  Historically, sites such as Yahoo! and Google have vigorously asserted privacy rights on behalf of their webmail users, but if grounds to quash (defeat) a subpoena or warrant don’t exist, the service provider will have no choice but to comply. 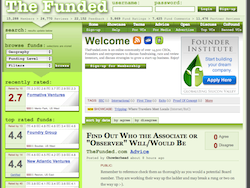 In other words, anonymity can be defeated — and with streamlined registration on most social sites these days, tying accounts to Facebook or Twitter profiles and allowing users to log in via Facebook Connect, Twitter OAuth or Google Apps, it’s particularly likely that the true identity of a poster will be revealed when a site such as Quora is required to comply.

As with online forums offering stock tips, service provider ratings, investor reviews, etc., it’s in Quora’s best interest to cultivate a sense of secure anonymity among its users to encourage the most frank, open and vigorous discussion of controversial topics and people.  Yet the very nature of some of these anonymous discussions is likely to attract the attention of wealthy and powerful figures with the resources to litigate, as well as government agencies (in the case of allegedly illegal conduct).  Consider, for example, what might transpire if someone were to post a viciously defamatory response to this question about Mark Hurd’s resignation from HP.  If in fact there is a criminal investigation underway regarding Angelgate (about which I have my doubts), I wouldn’t be surprised to see Quora on the receiving end of legal process seeking to unmask some anonymous posters on the subject.  Caveat Anon User.

← Legal Guidelines for Small Businesses Using Social Media
If You Build It, They Will Abuse It →