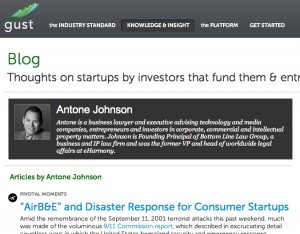 Author’s Note:  After a summer hiatus, I have begun blogging weekly at Gust, an innovative investor relations platform for early stage startups and angel investors “From Pitch to Exit.” You can find my latest posts in the “Blog and Insight” section of the Gust.com website, along with articles, video, and insights from luminaries such as Tim Berry, Esther Dyson, Josh Kopelman, Alan Patricof, and Martin Zwilling. I am honored to participate in this new venture and look forward to contributing alongside such talented entrepreneurs and investors. In recognition of this relationship, new articles will appear first at Gust, followed by cross-posting here at Mashtag a few days later. To stay on top of the latest posts, follow @Gustly on Twitter or subscribe to the RSS feed.

Amid the remembrance of the September 11, 2001 terrorist attacks, much was made of the voluminous 9/11 Commission report, which described in excruciating detail countless ways in which the United States homeland security and emergency response infrastructure failed to respond adequately to a disaster of unprecedented proportions.  The “system” as it existed at the time broke down, with every point of failure costing innocent lives.  The lesson of the report was clear:  Preparation is everything when disaster strikes, and we as a nation were caught woefully unprepared to deal with a large-scale terrorist attack. 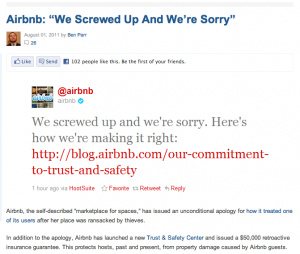 This principle is no less true of businesses than government agencies; particularly in the decade following 9/11, large corporations have made it a priority to invest considerable resources in disaster recovery plans, crisis manuals, business interruption insurance and so forth.

There are many kinds of business crises beyond the natural disasters and acts of terrorism that come to mind.  Consider the far less serious, but still newsworthy, disaster that befell startup Airbnb this summer.  A darling of the tech startup community, reportedly valued at more than $1 billion with investors including Greylock Partners, Sequoia Capital, Andreessen Horowitz and DST Global, Airbnb is an online “marketplace or spaces” that facilitates short-term rental of properties such as members’ homes or apartments.  The incident, involving a woman “EJ” whose apartment was ransacked by short-term tenants who booked a stay through Airbnb, was promptly christened “Ransackgate.”  The company was savaged by critics for its initial mishandling of the incident; reportedly, she got little response or assistance until she published a blog post on the subject, which spread virally and became a serious embarrassment to the company.  (I couldn’t resist calling the company “AirB&E” after that—look it up.)  Even then, some of the responses appeared to focus on silencing the victim and denying responsibility.

How could such a well-regarded, highly successful startup be so inept in its response to an entirely foreseeable customer risk/abuse incident that was guaranteed to happen sooner or later?  The answer, I believe, lies in the “echo chamber” nature of Silicon Valley, early adopters, the startup community and the tech business press.  Much has been written about the cooperative nature of Valley culture, and Airbnb itself was an outgrowth of the idealistic “couch surfing” movement.

Why wasn’t Airbnb better equipped to respond swiftly and effectively to the incident?  The primary answer, in my view, lies in the vastly divergent cultures of startups vs. established businesses.  A startup is in the business of creating value from nothing – or, as Steve Blank describes it, “searching for a repeatable and scalable business model.”  Large companies focus on protecting and expanding upon their existing successful business.  A startup that has found product-market fit needs to transition quickly into that category, with operational excellence taking precedence over bursts of creative brilliance, because it has much to lose.  The very best startups, such as Facebook, have been able to make this transition gracefully even without changing CEOs.  I give Mark Zuckerberg tremendous credit for that accomplishment, together with Sheryl Sandberg and the rest of Facebook’s senior team.

We lawyers are often rightly criticized for being excessively conservative and risk averse in pointing out everything that could go wrong.  In the startup world, seeking to eliminate all risk is a hallmark of big company or big firm lawyers who “don’t get it.”  When speed of execution and efficiency are paramount, the eternal grind of that style of lawyering is excruciating.  Yet when it comes to risk management of user communities – content, community or commerce – failure to be looking around the curve ahead can result in pretty ugly crashes.

As it gains traction, every social or consumer Internet startup should pause at some point and take stock of risk and abuse issues, viewed as broadly as possible.  It doesn’t necessarily mean hiring an expensive consultant (or reasonably priced Web 2.0 startup lawyer) with deep expertise in the area, but applying a mindset of pessimism and paranoia is helpful for purposes of this thought exercise.

The pessimistic entrepreneur
Almost every bad thing you can think of will occur sooner or later if the service scales to the point of millions of users.  This is one time the entrepreneur’s unflagging optimism is not helpful, and is actually downright counterproductive.
Essentially, get inside the bad guy’s head.  Here are some concrete recommendations:

To its credit, Airbnb came out with a long list of improvements in the wake of “Ransackgate,” but only after sustaining serious damage to its reputation that undermined confidence in its entire business model.  More than fifteen years into the consumer Internet revolution, there is no excuse for not foreseeing and preparing for the kind of incident that major players in online dating, auctions and similar businesses have been dealing with since the mid-1990s.  Financial, legal and reputational consequences await those who are reactive rather than proactive—and competitors will take advantage of each misstep.  (As Michael Arrington wrote in TechCrunch, in Airbnb’s case, “The hotel lobbyists couldn’t ask for anything more.”)