For the past couple weeks, I’ve been immersed in projects and events related to social media and entrepreneurship:  Crisis Commons’ Haiti efforts (affectionately referred to as “Geeks Without Borders”), Twiistup in Los Angeles, and Social Media Week San Francisco in San Francisco.  I’ve been fortunate to learn from thought leaders and connect with innovators with wisdom to share on a bewildering range of topics – enough material for at least a dozen blog posts.  There’s been so much to ponder that I’ve had trouble distilling it down to discrete topics to write about in blog-sized chunks until now.

On Tuesday, as part of Social Media Week, I visited the Autodesk Gallery for a panel discussion entitled “The Next Challenge For The Crowd: Quickly Build Real, Hard, Complex Shit That Matters (Like Cars).” 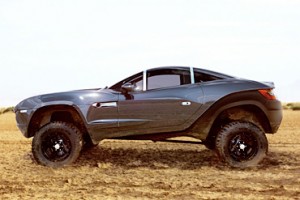 With a title like that, I was not about to miss it.  The Rally Fighter parked out front (right around the corner from a Tesla roadster, natch) foreshadowed the fascinating discussion inside.  Many of the ideas which had been swirling around in my head for the past week coalesced in this vibrant 90-minute conversation with Jay Rogers, CEO and co-founder of Local Motors; Marten Mickos, former CEO of MySQL; and Chris Anderson, Editor-in-Chief of Wired, moderated by Matt Johnston.

Others who know far more than I do about the auto industry have covered Local Motors and the Rally Fighter in detail already, so I won’t repeat it here, although I encourage readers to check out the links. As a startup lawyer and social media industry executive, what I find fascinating are the legal, regulatory and risk management aspects of taking on this kind of challenge. Open source and crowdsourced software development still makes many IP lawyers queasy on a gut level; it’s antithetical to the very notion of intellectual property as a proprietary right that must be kept a closely guarded secret to maintain its economic value.  Nevertheless, many entrepreneurs have figured out how to build successful businesses out of open source.

At the panel, Chris made the point that open source began as a movement in software development solely because techies were the only people to enthusiastically adopt the Internet as a collaboration tool prior to the dawn of the commercial Web (driven by graphical Web browsers starting with NCSA Mosaic in 1993 — although a few of us geekier non-engineers were mucking around with things like Usenet and Gopher), and therefore had a running head start on everyone else.  As we’ve seen in recent years, many other types of projects can be developed using an open source or crowdsourcing model.  The product of these initiatives is generally intellectual property; as long as we can get culturally comfortable that the IP belongs to the community rather than the individual, and get the necessary assignments and licenses in place to avoid any legal scuffles down the road, why not pursue ambitious design projects this way?

Having gotten comfortable with the IP issues, the subject that most concerns me is potential liability.  If a piece of software crashes, you can reboot, roll back to the previous release, or restore from a backup.  If a car crashes, people die.  I asked the panelists to address this question and it prompted an interesting exchange.  Jay likened the current state of the market to the world of custom shops and garage tinkerers, in which drivers who choose to make aftermarket modifications to their cars assume the related risks.  (I’m not a personal injury expert, but I think it’s fair to say that in most cases, making mods that affect the vehicle’s performance, handling or safety would bar recovery in a product liability suit against the automaker if a causal relationship could be shown.)

As with open source software, it’s possible to disclaim many types of warranties by contract, but consumer protection law is paternalistic, with legislation and court decisions often making certain types of disclaimers void as a matter of public policy.  Plaintiffs’ lawyers are an aggressive bunch, and I think it’s safe to say that they will do their best to poke holes in the most conspicuous waiver, disclaimer or release, however voluntarily entered into by the consumer.  That led to Jay’s next point at the panel, which was that in the long run, if this business model is to be successful, it will be necessary to rethink and recalibrate some of these long-established legal and regulatory norms.

In reflecting on this potential shift, I’m reminded of the period in the late 1990s that marked a high point in the philosophy of cyberspace exceptionalism – described by Professor Eric Goldman as “the belief that the Internet was unique/special/different and therefore should be regulated differently.”

Already recognizing the power of the consumer Internet as a communications medium, Congress enacted two critical “safe harbor” laws in 1996 and 1998 (Section 230 of the CDA and Section 512 of the DMCA, respectively) to shield online service providers from liability for user-generated content that is infringing, defamatory or otherwise actionable.  (More about these in a future post.)  As I often reminded friends and colleagues at MySpace, without these twin pillars of statutory immunity, we would have been sued out of existence within weeks or months at most (as would every other major social media site).  It took some lobbying by the titans of the online industry (then companies like AOL, CompuServe and Prodigy), pitted against powerful interests on the content side (studios, networks, publishers and record labels), but in the end, Congress stepped in to protect the fledgling commercial Web.  A similar approach could be taken with crowdsourced design in manufacturing complex products like cars, but given the patchwork of state and federal laws, regulations and court decisions related to product liability, this could prove to be a daunting political challenge.

I enjoyed meeting Jay and Matt yesterday, chatting with them at the SF Green Drinks event later that night, and of course ogling the striking Rally Fighter along with the rest of the passersby on Market Street.  It will be interesting to see if this is a flashpoint marking the beginning of a bold new era of crowdsourcing in manufacturing.  I wish the pioneers at Local Motors the very best and welcome their comments here.

← 25 Years of Social Computing: Game Highlights at Halftime
How Do You Engage With Potential Followers Using Social Media? →