A time-honored format for sports commentary is the two-person team.  The sportscaster who calls the game play-by-play is usually a glib professional journalist with encyclopedic knowledge of the sport, the players and the league, bringing insight and analysis to the action unfolding on the field.  The color commentator is a veteran player who regales the audience with war stories, folksy anecdotes and simple but hard-earned wisdom culled from hundreds of days on the field and thousands of hours in practice.  Well executed, this combination makes for an entertaining broadcast that keeps the audience engaged for three hours at a time.

My goal in publishing Mashtag is to serve as both primary sportscaster and color commentator. As a business lawyer and executive in social media and the broader technology industry, I hope to bring the factual background and analytical tools of the profession to bear to explore some of the most interesting current issues in business, law and public policy.  As an enthusiastic user and consumer of social media and other information technology since the early 1980s; an “alumnus” of several high-profile (and not-so-high profile) consumer Web and entertainment companies; and a Silicon Valley native who delivered newspapers on Steve Jobs‘ block and lived in a house once owned by Bill Hewlett, I will also weave in some war stories, anecdotes, and hopefully a bit of accumulated wisdom that might prove useful.

Social computing has been a part of my life since the mid-1980s in Menlo Park and Palo Alto, where I accessed local bulletin board systems (BBS) using an 8-bit Atari 400 computer with a 300 baud modem.  (That’s 300 bits per second, or 1/1000 the bandwidth of today’s basic home DSL connection — a commercial standard set by AT&T in 1962.)  The “online” experience consisted primarily of posting raw ASCII text on monochromatic bulletin boards to connect with other, equally geeky teenagers; playing rudimentary, text-based online games; and perhaps trading in “warez.”

The bulletin boards mostly ran on Apple II personal computers that were modified to permit typing lowercase characters and connected to one user at a time with a modem and dedicated phone line.  (Repeated redialing was often required for popular sites that alway seemed to have busy signals.)  BBSes that were blessed with ample resources could offer multiple lines, allowing two or more users to access the BBS simultaneously, and perhaps a 5MB or even 10MB hard drive to store that coveted warez collection.  Foreshadowing today’s freemium business models, sysops (system operators) would solicit donations — easier said than done in a pre-PayPal world with a teen user base — in return for which the donor might receive certain advantages such as access to ASCII Express file downloads, elite areas of the site, or admin privileges.

Twenty years later — a decade into the consumer Internet revolution — I was fortunate to join MySpace as an in-house lawyer a few months after its launch.  The site exploded as a cultural and commercial phenomenon, becoming the most trafficked site on the Internet by 2007, with billions of page views per day. 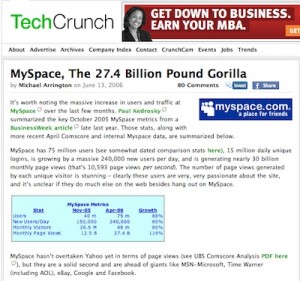 Although some questioned its ability to make money, the acquisition of parent company Intermix Media by News Corporation in October 2005, with Rupert Murdoch’s personal involvement, was an inflection point which underscored (to the tune of $650 million) the recognition by traditional media giants that social media and user-generated content had become forces to be reckoned with.

Following the merger, I joined another Web 2.0 business devoted to connecting people, eHarmony, to lead its legal team during a period of international expansion and product line diversification.  The contrasts to MySpace were striking:  Paid subscription vs. free service; one-to-one matching vs. one-to-many publishing of user-generated content; customer acquisition through affiliate marketing and extensive offline advertising vs. free viral promotion; and so on.

Over the course of three years, I witnessed the power of the social Internet to create relationships between people who never would have met any other way, made tangible by the hundreds of wedding photos that lined the hallways.  A Harris Interactive study showed that as of 2009, eHarmony accounted for nearly five percent of all new marriages in the United States — nearly 200,000 individuals, or 542 people per day — imbuing our work with meaning each day.

With very different missions, cultures, target demographics and business models, MySpace and eHarmony illustrated two paths to value creation and profitability by connecting people in much the same way as the slow, clunky BBS systems connected a much narrower slice of humanity — one 300-baud modem at a time — in 1985.  I hope to use this blog and the accompanying Twitter feed to connect with a broader online community that is equally passionate about carrying the torch for these revolutionary communications media forward into the twenty-first century.